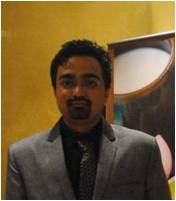 Mr. Akash Mehta started his journey in Educational Entrepreneurship with Logic Academy Pvt. Ltd. as a Co-Founder and CEO. Having cracked top competitive exams in the world himself, he decided to dedicate his time and energy towards his vision – bringing about a sea change in higher education.His students have gone on to study at premier institutions like MIT, Carnegie Mellon, IITs and IIMs.

These wise words by a fellow Gujarati - Mahatma Gandhi perfectly capture the career graph of Mr. Akash Mehta so far. Over the years, Akash has never shied away from breaking stereotypes in matters he is passionate about.

Mr. Akash is a life-long learner and over the years, he has dabbled in a wide variety of subjects such as Engineering, Economics, Linguistics, Event Management, Financial Management, Marketing, Politics, Leadership, Spirituality, Psychology, Vedic Sanskrit, Painting, Food Technology and Culinary Science. He is a professionally sought after consultant in Digital Marketing, Political Campaigns, Food Technology and Finance. For his incredible achievements, he was jointly awarded “Innovative Students’ Co-Creation Award for Leadership and Excellence (i-SCALE) 2015” by GTU Innovation Council.

Mr. Akash has had associations with top tier universities in Gujarat such as Pandit Deendayal Petroleum University (PDPU), Nirma University, IIT RAM, Kadi Sarva Vishwavidhyalaya (KSV) and Gujarat Technological University (GTU). In the process, Akash has gained valuable experience delivering more than 200 seminars and workshops and interacting with over 15,000 students.

Amidst all his variable academic and professional pursuits, the constant has been his passion to interact and guide students at S.P.B. Patel Engineering College (Saffrony). He currently spends time with the students at Saffrony, counseling them and molding them for bright future ahead.