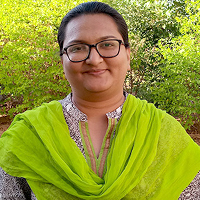 Dr. Pooja Mehta has been in academics since the year 2009. She has completed her doctorate in 2016 in Translation Studies. Her areas of interest include Translation Studies, Indian Poetics and Aesthetics and English Language teaching. She holds an Alamkar – Master’s Degree in Indian Classical Music (Vocal) too. Art, languages and literature has been her most loved subjects. Apart from teaching various subjects related to English language, she has been actively involved in syllabus design, conducting workshops and trainings for students.