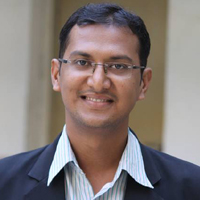 Dr. Gulab Bambhaniya is an Associate Professor at Saffrony Institute of Technology since 1st October 2016. He has completed his Ph.D. degree with the thesis title ‘Signatures of Neutrino Mass Models in Current and Future Experiments’ from Discipline of Physics, Physical Research Laboratory (PRL) in 2015. He did his M. Sc. in Physics from Physics Department, Sardar Patel University, Vallabh Vidhyanagar in 2010. He was awarded junior and senior research fellowships during the Ph.D. by Department of Space, Government of India. He was also awarded grants for attending the conferences abroad from CERN, Geneva; Department of Space, Govt. of India; Centre for International Co-operation in Science (CICS), Govt. of India; and International Center for Theoretical Physics (ICTP), Italy. He has published more than 10 research papers in peer-reviewed International journals. He was also a post doctoral fellow at PRL after completing his Ph.D.