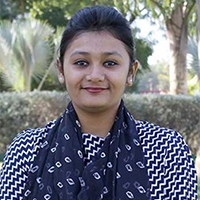 Prof. KrinaShah secured the second position in C.U. Shah Science College during her Bachelors of Science. She completed her masters in 2016 and started her career at Venus Institute of Technology. In 2017 she joined S.P.B. Patel Engineering College. Her interest is in the applications of Mathematics. At the institute she is involved in various co-curricular activities.