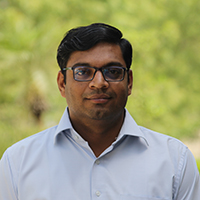 Prof. Manish Patel has worked in academia as well as in various companies. At Saffrony Institute of Technology, he is actively involved in various co-curricular activities like ROBOCON- which is National & International robotics competition and SAEINDIA Aerodesign Challenge- which is National remote Aircraft Designing & Developing Competition.  He is engaged in Laboratory Development starting form material procurements to erection activities of Electrical Machine Lab, High Voltage Lab and Switchgear and Protection Lab. He is involved with the LED club for New Design and Development of low cost and Efficient LED bulb design.

He had been Senior Engineer with experience of preparing job billing Schedule, Billing Breakup, Procurement of items and coordination between design team and vendor for resolving technical queries and also involved in negotiation of some items at L&T. He worked as a Site in-charge with experience of Site Execution work at APU, ONGC-Uran Project, Execution related to Earthing, Lighting and Panel Erection work and also engaged in system handing over formats to resolve the punch points raised by client.