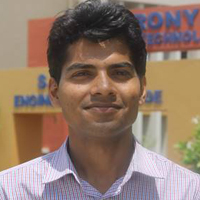 Dr. Vishnu Awasthi is Assistant Professor in Saffrony Institute of Technology since 6th September 2017. He has completed a Ph.D. degree in area of “Investigation of Heterojunction Interface of CIGSe/doped ZnO for Solar Cell Applications” from Discipline of Electrical Engineering, IIT Indore in April 2017. He did M. Tech. in “Laser Science and Application” from School of Physics, Devi Ahilya University, Indore in 2011. He did M. Sc. in Physics from Govt Holker Science College Indore in 2009. He has got selected as project trainee in RRCAT, Indore, where he worked on “Studies on Nanocomposite Organic Photovoltaic Cell.” He was awarded MHRD fellowship during the Ph.D. and worked as Teaching Assistant in IIT Indore from dated July 2012 to September 2016. He was also awarded travel grant for attending the conferences abroad from Science and Engineering Research Board Govt. of India and Centre for International Co-operation in Science (CICS) Govt. of India. He has published in more than 20 peer-reviewed International journals. He also published 12 conference proceedings in the international conferences. He has attendance many of them personally in India and abroad. He has also worked as an Assistant Professor, in Govt. GSITS College, Indore (M.P.) 2011-12.